Today I interviewed a bus driver called Roy. My classmates and I asked Roy some questions and I noted down his answers - I asked some the questions too! One of the questions he said he couldn't answer was, "What was your most embarrassing moment?".  He said he never gets embarrassed about anything! Then Aya (my friend) asked if he could do a magic trick because his full time job is now a magician. So he did do about 4 tricks. I was amazed by the tricks he could do! The last one was for luck! My classmates and I found it fun.
Posted by digital:works at 06:58 No comments: 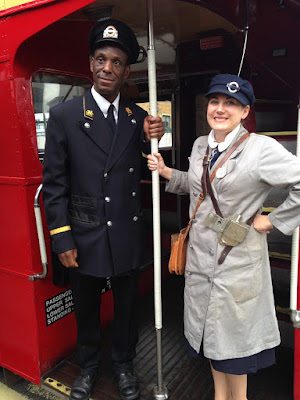 Cecil: How I Became a Bus Driver

I was walking down the street of Barbados when a young man came and asked me if I would like a job in England, since they were having a problem hiring enough workers in Britain. They said it was something to do with London transport and that interested me even more. But I already had a job in Barbados - I thought about it and then I decided to go to England because I decided that I needed to make money and wanted to see another part of the world.

So I made it to England three weeks later, after saying goodbye to all of my family and friends. It was really hard as some people were racist and it was hard to get used to a new culture. I was looking forward to my new job of being a conductor on an RM (although I honestly I don't know what it stands for). After a while I found my place in the London transport community. And I found out RM stands for Route Master!

Tell us about how you became a bus driver.
What was the skid test like?
What things do you hate most about your job?
What things do you enjoy most about your job?
What kind of buses have you driven?
What would you do if your bus broke down?
What is the most dangerous situation you have ever dealt with?
Why do you love buses?
What is the most stressful thing about bus driving ?

Today we met three bus drivers Roy, Terry and Mike .
Terry came in and talked about his time as bus driver
and his experiences .We interviewed him and he answered
all of our questions some of them were funny and some of them were
very interesting.Mike came in with lots of old bus items like a
gibbon machine, Mike showed us how it worked and a ticket came
out. The pictures were very exciting , because in the pictures Mike
was driving through a big bridge in Paris . Roy came as well and he
also answered our questions with a unique set of answers.
However,the thing Roy did different was that he preformed some
magic tricks. We learnt a lot about buses from the visitors today and
We will learn more later on .

By Sirah and Fatima
Posted by digital:works at 06:40 No comments: 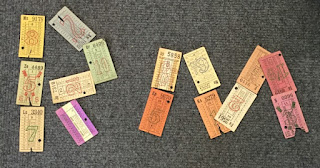 On Tuesday 7th May, we went to the London Transport Museum (LMT). We visited the museum yesterday but we're only the second school ever allowed into the library where there were many rare books about the history of London Transport. While they were talking to us and showing us a film about buses we took notes. After we  were allowed to browse the library looking for useful books.

At the end of the session a man called Laurie (who is an old bus driver) gave us some very old bus tickets which were actually used in World War 2. We loved the trip and are looking forward to tomorrow's interviews.

By Walid and Ali 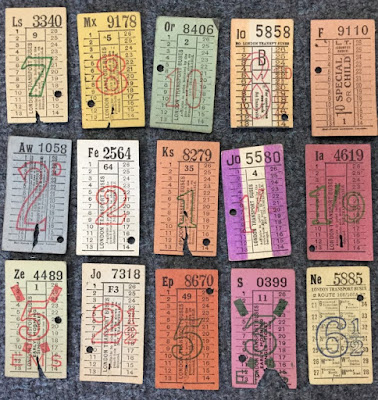 Posted by digital:works at 06:36 No comments: 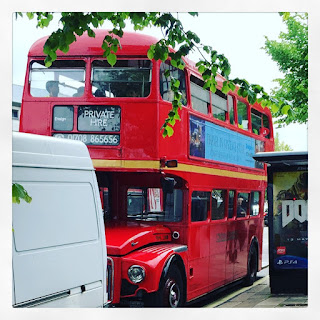 In 1910 the newest bus was the B-Type which could hold 34 passengers and only moved at 12mph. When WWI started the army didn't have a way to move soldiers around so they took London buses to Europe; they also took the drivers with them. Nearly 1,200 B-Types were taken.

The buses were repainted for camouflage and each bus window was bolted up for protection. Also, the buses had weapons inside. Some buses even had pigeon coups attached to the roof to house homing pigeons which were used for sending messages. The buses often broke down and some bus drivers were killed. After the war, the buses which were not destroyed were used to bring the troops home.

By Walid and Abdulrahim
Posted by digital:works at 04:24 No comments:

The Diary Of Mary Morgan


Dear Diary,
Yesterday I was contacted by the artist Eric Kensigton which made me surprised. He told me to come to the studio so he could paint my picture. He said that I saved little children from a bomb blast and protected them with my body. I was shaking with fear and my knees were wobbling. As I put makeup on, I looked in the mirror and gulped.

When I went into the studio, I was nervous that I had applied too much makeup. Slowly I walked in and I saw Albert Coe and Eric Kensigton waiting for me at the back of the studio. As they were looking at me, Eric Kensigton told me to come over so he could paint my picture - but told me that first I needed to wash off all my make up! I'd put too much on!
I rushed to the toilet and washed my face.

I returned back and was painted. It am nervous to see how it turns out!

Tabassum and Samira
Posted by digital:works at 03:57 No comments:

A Postcard From George Shillibeer To Mum

I am now in France, Paris and I'm lost for words. I have just seen one of the most spectacular things l have ever seen. I saw a huge cart being pulled by 2 horses and it was transporting a crowd. This was no ordinary kind of cart - the French people call it an "omnibus". It goes on the same consistent route back and forth all day and people pay to get on and travel where they need to go. I was mesmerised by this creation and I really think that this idea could spread across the world.

I am thinking about bringing this idea to life at London. This could change the citizens lives forever and might make me some money too!

I am thinking about taking this idea to the next level by making it bigger to carry more people and add another horse to make it easier to transport to certain destinations.

Posted by digital:works at 03:49 No comments:

Our Journey To The London Transport Museum Depot

On the 27th May 2016, we were invited to go on a spectacular trip to the London Transport Museum Depot in Acton (LTMD).  An old Route Master was waiting for us outside the school gates. It was a massive surprise for all of us. Unfortunately, when we were boarding the old bus, we noticed that another school was sitting on the top deck. We were so disappointed but didn’t let it show on our faces.

When we were going to the depot, we were all really excited because we had never been there before. It took a long time to get there because we went on the A40. It was quite unusual because a bus never goes on a motorway! 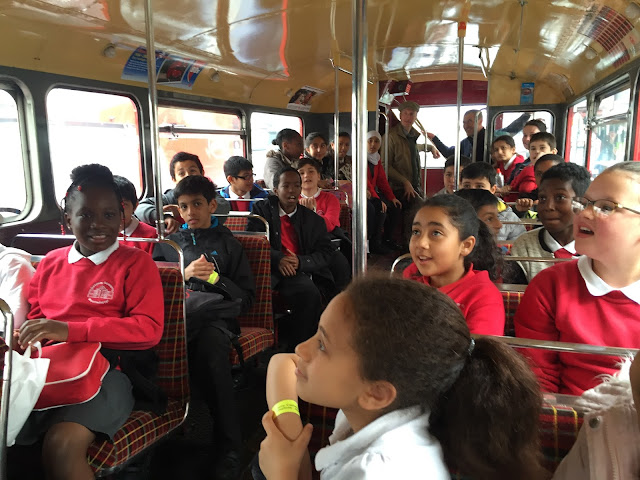 Sav and Matthew, the people working with us on the project, introduced us to 2 time travelling people from the past. There was a conductor, Cecil, and a clippy, Violet, who explained how the bus worked. They were really funny and were telling each other to get off the bus.
When we arrived, we got out and turned around to stare at the enormous building. Before our eyes was the LTMD. Inside the massive Depot, there were ancient artifacts and olden vehicles. We were lucky enough to get inside some of them. The museum curator and the staff were very kind and we thanked them for giving their time to us. Our knowledge of buses has increased hugely because of them.

As we left the building, the other school agreed to let us sit at the top - We really appreciated that. When we were close to the entrance, all of us dashed toward the front seat to get the best view but we noticed that the 2 time travelling people were occupying the seats. They were trying the deny that it was them but we knew that they were lying. Some of us sang songs on the way home to pass the time.  When we reached the school it was a great ending to the day. All credit to our wonderful teachers and all the staff at London Transport Museum Depot.

Posted by digital:works at 02:05 No comments:

After 2 days of trips, we are finally back at school where we are starting our project. When we got in this morning, the film group continued training how to use the cameras and our writing group was with Sav and Mr Goodsir learning how the blog works.

After break, all the project people gathered together with Matthew, Sav and Mr Goodsir (my teacher). We were split into our drama groups from Monday and thought of lots of questions we could ask the people we were going to interview on Thursday. While we were thinking of questions, Sav and Matthew came around to every group to see how they were going on with the questions.

Next, we shared our questions with everyone and typed them onto the whiteboard ready for tomorrow. Then it was lunch.

This afternoon, the writing group are starting typing up their blog on iPads and the filming group are still training for tomorrow. We're looking forward to the interviews!

From Tabassum and Samira.
Posted by digital:works at 07:07 No comments: